Our story of this day

It started the same as any other day. I was scheduled to do a talk in central London on guess what, trading on betting exchanges. I took the train in central London, as did my delegates and after switching from overground to underground I remember clearly looking at the clock on the exit at 08:50. It was going to be a little tight for me to get to the venue and get set up in time, but I had done it. Only a slick bit walking and tube management had got me there in just enough time.

I headed to the room and set up and waited for the delegates to arrive. Bit by bit, they started to arrive.

While it may seem a bit bizarre now, none of us knew what had happened. We didn’t have a clue that a terrorist attack had happened. The rumours at the time were an electrical fault and explosion. So with most people settled in, we just carried on as normal oblivious to what was going on outside.  A few of us had directly got caught up in the bombings, but nobody was seriously hurt, just a few bumps and some confusion. A couple of guys had to get off the tube and walk out of underground on the tracks. But still, there wasn’t really any awareness of what was happening.

During the presentation there was the odd comment on how many sirens were going off, things seemed busier outside on the street below. But this was central London, that was normal.

The ringing phone and the realisation

Most people had turned off their mobile phones to listen to the talk. One person hadn’t though, me. My phone kept ringing, so after trying to ignore it, I eventually answered it. “Are you OK?” came the voice of my wife down the phone. Suddenly we all started to realise what was going on. About half way through the conversation the phone cut out, it would be the last time for a while that any of us would speak to our relatives. With Internet sites completely stuffed up as well, we were a bit clueless as to what was really happening. It was suddenly all a bit surreal.

I rolled up my sleeves and immediately went to seek advice, only to realise that most of London were scattering away from the centre as fast as they could. This was a little tricky as there were no buses, trains or taxis; it was foot traffic only. On eventually finding a policeman, he advised us to stay put till things were a little clearer. He didn’t know if it was a ‘normal’ bomb or a chemical attack.

I stopped the talk and debriefed all the delegates and asked them to make a decision. If they wanted to stay we could carry on and reassess things throughout the day. Or we could stop now and head home. We voted on it and in true British fashion, we stayed put and just carried on. It actually reminded me of that part of ‘Carry on up the Kyber’ when the British HQ was under attack but they carried on having their dinner! A very, very surreal experience.

Eventually, we ended slightly early and set off on our walk across town. It was a strange experience, the whole place was completely quiet. Not a soul to be seen, only traffic lights blinking on and off to a non-existent world. To add to the atmosphere, it started to rain, not just a little but a lot! A small group of us found an abandoned coffee shop and took refuge in it. Just then the mobile phone network sprung back into life and all the phones started ringing. It was an emotional time listening to the messages as they poured in from all over the world checking to see if we were OK.

Eventually, we split up and I found my way to Waterloo station where the first trains were just starting to run again, under heavy security. I jumped on the train for a long and lonely journey home. It was really strange watching the news that night. I’d been there, but the scale and impact of it just hadn’t sunk in till I watched the news. I was also incredibly lucky with my timing and choice of tube transport that day.

I know it seems unfortunately common now. But spare some thoughts today for those affected by any similar events and have pity for those for whom hates forms a daily part of their life; whatever form it takes, not just terrorists. I guess it’s just a utopian dream to think that maybe people can just get on with each other for once? Realising that everybody is different and being tolerant of that, is a good step in the right direction. Being nice gives you a warm feeling inside and will make somebodies day, give it a try now and again!

Anyhow, it’s a day that I or the others with me are ever likely to forget! 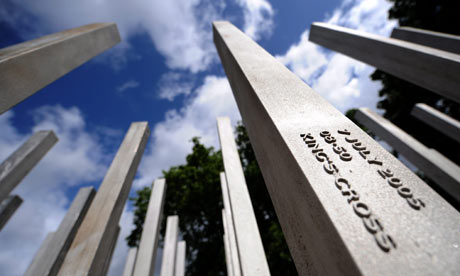 Why Saturday is like a mini Ascot for me

Where Angels fear to tread